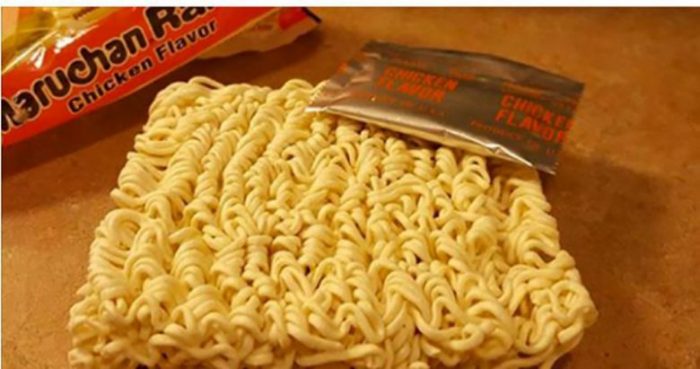 hands or money. Most of you probably do not consider them to be a healthy food, but you do not think that they are

bad for your health like a burger or a fast-food burrito. However, according to an experiment done by Braden Kuo, a

doctor at the Massachusetts General Hospital, we should definitely think twice the next time we are about to buy

WHAT THE EXPERIMENT SHOWED?
The doctor used a tiny camera to check out what is happening in the stomach and digestive tract after the consumption of instant noodles. After two hours, the noodles remained intact in the stomach, which caused additional pressure on the digestive system that is forced to work much longer to breakdown this highly-processed food.

When food remains too long in the digestive tract, it starts affecting the absorption of nutrients. Unfortunately, instant noodles have no nutritional value at all. They contain a lot of harmful additives like TBHQ that can never be good for your health.

THE DETRIMENTAL EFFECTS OF TBHQ
Though it is often listed as an antioxidant, it is definitely not. This is a synthetic chemical that has antioxidant characteristics that prevent the oxidation of fat and oil and it also serves to prolong the shelf life of processed foods.

It is commonly found in the chicken nuggets of McDonald’s, the peanut butter cups by Reese, in Red Baron’s frozen pizza, and many other products. Believe it or not, this chemical is also present in lacquers, pesticides, and varnishes, but cosmetics and perfumes as well. It serves to extend the rate of evaporation and to better the stability.

The FDA requires that this chemical does not exceed 0.02 percent of its oil and fat content. Nevertheless, the best option is to avoid the exposure completely. Namely, one gram of this “antioxidant” can cause collapse, a feeling of suffocation, delirium, tinnitus, nausea, and vomiting. Other health problems associated with it are liver problems, problems with reproduction, and biochemical changes at low doses.

INSTANT NOODLES AND METABOLIC SYNDROME
According to another study, women who ate more instant noodles had a higher chance of metabolic syndrome, that is, 68 percent, than the women who did not. The symptoms they experienced were high blood pressure, high levels of blood sugar, central obesity, high levels of triglycerides, etc. These symptoms make you more prone to diabetes and heart problems. What’s more, the participants who consumed these noodles had a decrease in the intake of nutrients like protein, calcium, iron, potassium, and vitamins A and C.

This excitotoxin can damage the nerve cells and even cause death. It can also trigger brain dysfunction and problems with learning, as well as Parkinson’s and Alzheimer’s.

This harmful substance can cause problems with weight gain and lead to obesity.

All in all, the best option would be, as previously mentioned, to avoid consuming instant noodles altogether. You benefit in no way because they have no nutrients and your exposure to serious health problems is much bigger.