There’s nothing worse than getting out of a hot shower and going to wrap up in a nice warm, cozy towel…just to find that the towel reeks of mustiness. Instead of smelling that fresh smell of clean-linen, you’re often met face-first with a kind of stale, moldy smell from your towels. And nobody wants that.

Why do our towels tend to stink, even after we’ve washed them?

Well, when towels are put away while still partially wet, they tend to develop a sour odor. Ironically, another source of towel odor comes from detergent/fabric softener build-up. These build-ups also cause towels to loose their softness and absorbency. So if you’re washing your towels as per usual, and even using fabric softener, what are you doing wrong? How is there another way to clean towels that will nix that musty stink?You don’t have to wash your towels in some strange, different way, all you have to do is add one extra special ingredient to your towel load: white vinegar.

The TODAY Show asked Carolyn Forté, director of home appliances, cleaning products and textiles at the Good Housekeeping Institute, for tips on freshening smelly towels. She swears that adding one cup of distilled white vinegar to her towel load keeps her towels fluffy and smelling fresh.

“For high-efficiency top-loaders or front-loaders,” she adds, “I would just fill the fabric softener dispenser to the max level with vinegar so it is automatically dispensed in the final rinse. Otherwise, with these machines, there’s no other way to add it at the correct time.”

During the final rinse of the laundry cycle, pour your cup of vinegar into the fabric softener dispenser. The smell of vinegar will wash out and your towels will be left fluffier than ever. 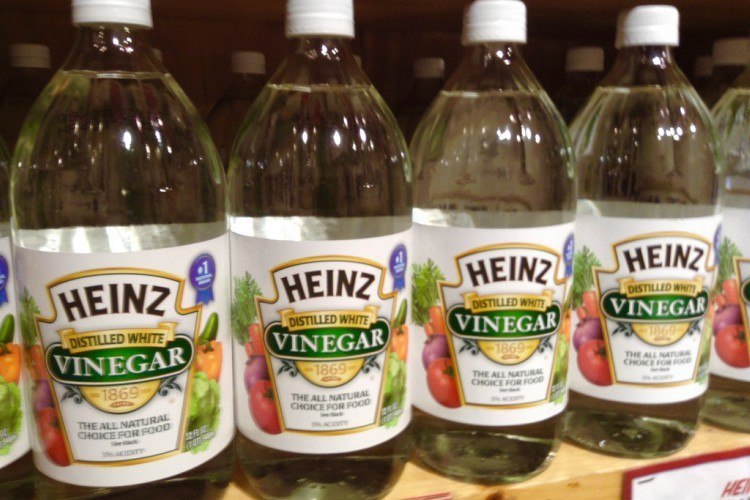 Mike Mozart via Flickr
Although this might be a secret weapon to get stink out of towels, Forté notes that you don’t have to wash your towels with vinegar EVERY time. It’s best just to do when you’re noticing the mustiness return to the fabric. If you use this trick with every wash, your towels will start to smell less like mold and more like vinegar.

If your towels do start to smell like vinegar, just try rinsing them without soap one more time. This second rinse should keep them just as soft and fresh while also being able to take out that lingering smell.

Brett Blignaut via Flickr
Vinegar is seriously a miracle product. It can get stains out of just about anything including clothes and glassware, it’s great for making appliances shine, and it takes the stink out of rancid-smelling fridges easily.Speaking of stain remover, vinegar doesn’t just make towels fluffy, more absorbent, and better smelling, it can also clean stained towels! For a little extra boost on really tough stains, add a little baking soda to a stained load of towels. When you take them out of the dryer, they’ll look like they just came from the store!

What do you think about this secret ingredient to stink-free towels? Share any laundry tips you have and your thoughts on this trick in the comments section below.